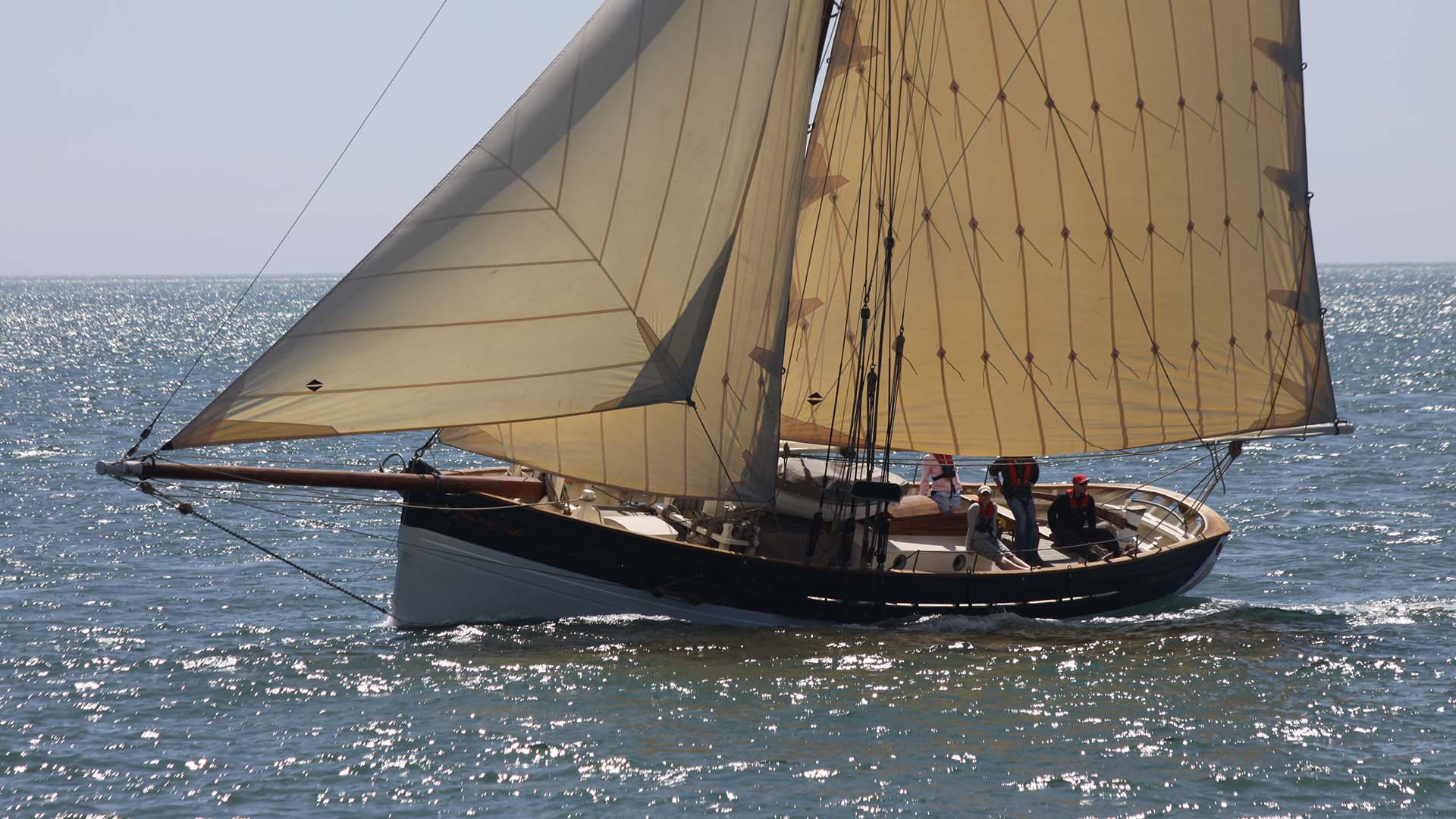 Hi! My name’s Guest, Alex Q Guest – not quite the same ring to it as M’s favourite agent I know but it’s served me well enough through the years. Why my parents favoured me with the middle-name “Quintessential” is an interesting tale – but it’s one for another time.

My first conscious memory of seeing Amelie Rose came one day in January 2012 when I was off work laying ill at home on the sofa. Wrapped in a duvet and with a tissue stuffed up each nostril I had spent the day blurrily watching television. As I flicked from one brainless vision to another my fevered channel hopping suddenly alighted on what seemed to me to be an image of perfection forging her way through an azure sea. I had stumbled across the Hungry Sailors sailing on the Amelie Rose and from that point onwards I was hooked.

Even the moustachioed presenter and his half-masted-trouser wearing offspring couldn’t put me off the show with their over-faffy cooking and ridiculous competitiveness. No, I stuck with it, for every 5 minutes or so we’d be transported back to the wonderful boat and I could dream that one day I too would be able to afford such a beautiful, functional thing. Where this sudden affection for boating came from I don’t know. A fleeting fixation with Swallows and Amazons when I was young had seen me pass my RYA Dinghy Level 2 but much beyond there I had never ventured. 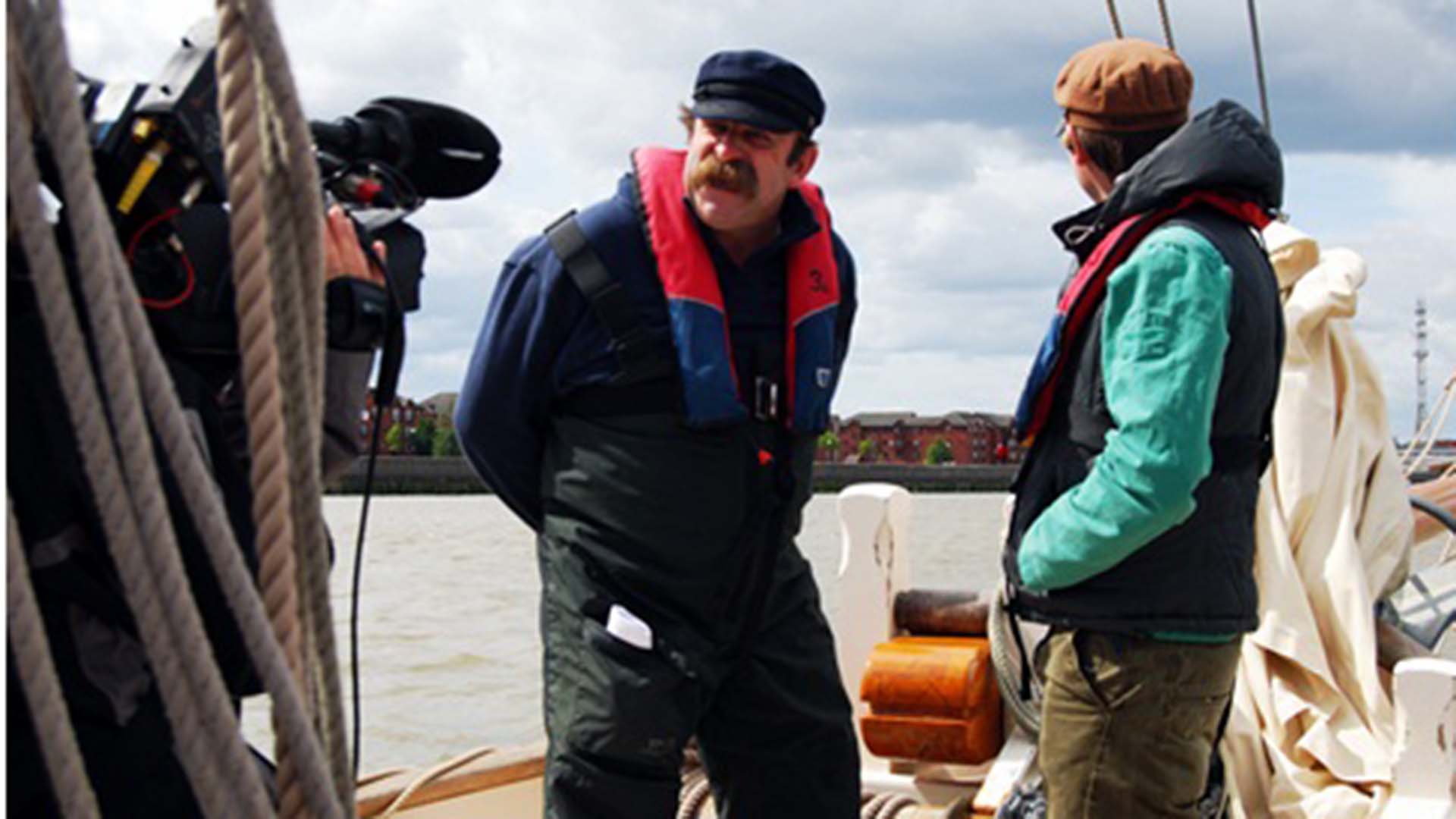 However once I had awoken this feeling it would not doze off again, I had to know more. Turning to the ubiquitous Google (other search engines are available) I was delighted to discover that my days of dreaming were over. Far from being “their boat”, as the presenters announced so regularly, the Amelie Rose was actually a Charter vessel, and for just a couple of hundred pounds I could try out a voyage on a “Traditional Taster Weekend”.

And so, one Friday later that year, I found myself peering nervously around Dorset Lake Shipyard trying to find some clue as to where I should present myself. Obviously used to divining a newbie guest from amongst the rest of the assembled throng I was soon accosted by a face I recognised from the TV. Skipper Nick was all hair and smiles as he guided me to a table to meet my fellow shipmates for the weekend. Nerves were soon dispersed as over a lovely meal I discovered that several of the other guests were, like me, relatively clueless about sailing (let alone aboard a Pilot Cutter) and that even those that professed some sailing experience were just as excited about the idea and not at all the “yachty types” I had feared.

The evening progressed swiftly and before long we were climbing aboard the boat herself. Wow! Nothing that I had seen on TV had quite prepared me for quite how big, solid and absolutely draped in ropes she would be. Nothing I saw made any sense from a sailing perspective. Even her tiller (ok, so I could recognise that) was nearly as long as the boat in which I had learned to sail all those years ago – she was magnificent! 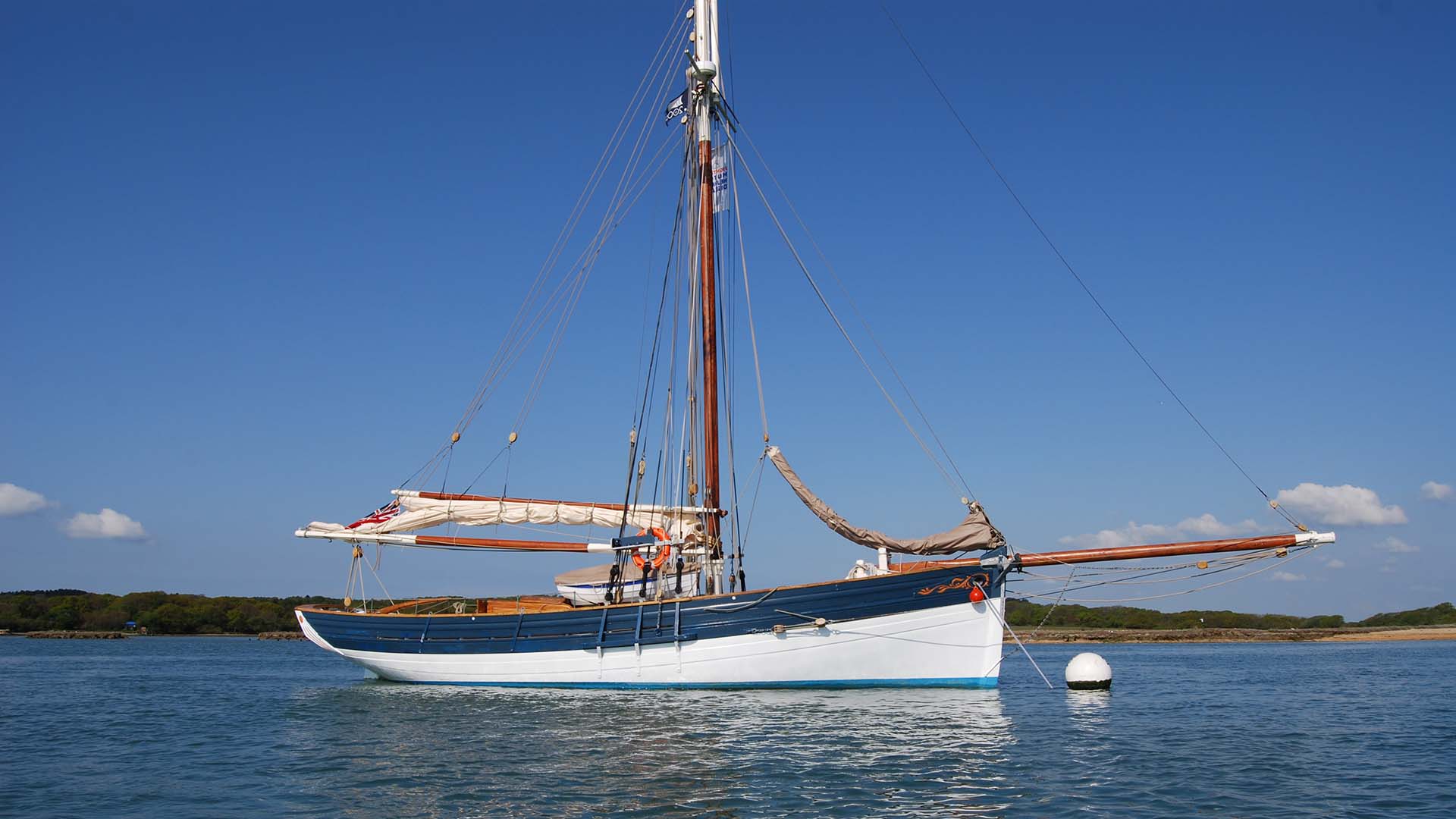 Downstairs we shuffled about stowing our gear whilst Nick and his crew pointed out various features, brewed up some lovely coffee and gave us a quick briefing about safety down below. This mainly seemed to consist of warnings about things we were assured would never happen but did also include welcome instructions on how to pump the “heads” (toilet to you and me) and how to use the gas cooker safely if we wanted to make a cup of tea. After a cuppa, a quick stroll around on deck and more chatting with the other guests I was soon tucked up in my sleeping bag, running through the “heads” instructions in my mind in case I needed to get up in the night and listening to the soothing gurgling noises of water moving past the hull outside.

I awoke to the sounds of hustle and bustle and to the aroma of yet more of that lovely coffee (apparently Nick does not function well unless sufficiently oiled with caffeine). Breakfast was brisk and business-like as apparently we had to “make” a tidal “gate” at “Hurst Narrows” and so needed to be off sharpish. I donned my hired wet weather gear and hurried up on deck to make sure that I didn’t miss anything as some of the guests were already pulling off sail covers and looking at the resulting view with various degrees of bafflement.

We needn’t have worried. Nick and his crew were clearly seasoned hands at explaining the whole thing to beginners and were great at not only showing us how to do things but also at explaining why we were doing it. I have to admit that a lot of the why stuff went straight over my head but it was great to be involved in setting everything up even if I didn’t really understand what we were doing! In what seemed like no time we’d had another briefing about safety (this time mainly to do with not falling overboard), hoisted the huge mainsail, and were off, half motoring half sailing out of Poole Harbour. 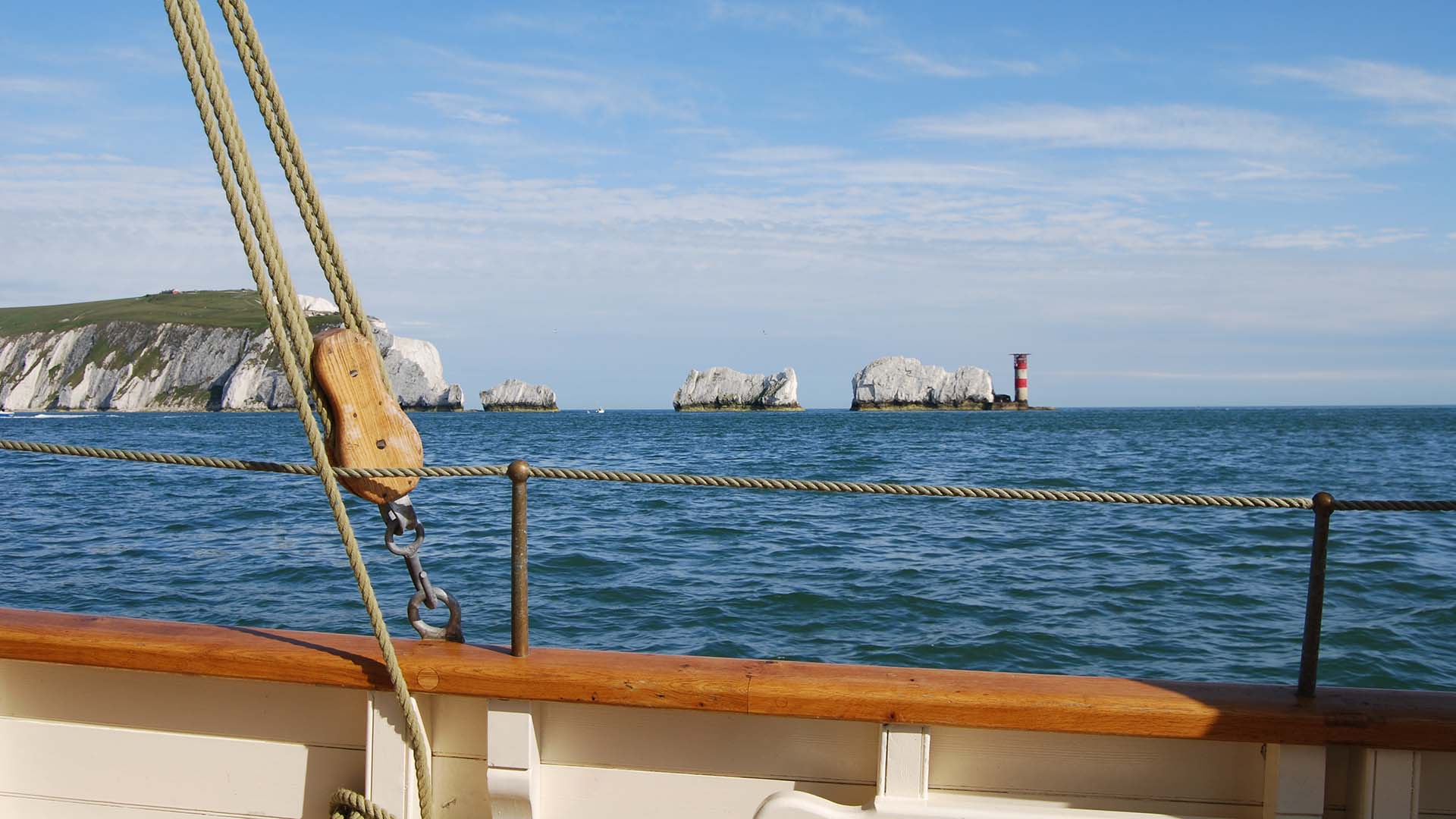 After passing through the narrow entrance to Poole we soon had the front sails up and finally were sailing. Amelie Rose is just incredible to sail. She feels so big and solid and yet it seemed to me that we were tearing along, even though the wind wasn’t all that strong. Nick kept us all involved – firstly hoisting another sail (the topsail this time) and then showing us how to tack the boat as we were sailing into the wind. This last caused a fair amount of hilarity as we ended up playing “tug of war” with each other during one tack with two groups of us pulling on opposite ends of what turned out to be the same rope (it’s quite difficult to tell!) Before long however we all got the hang of what to do and by the time lunch somewhat miraculously appeared we were even eliciting the occasional “good tack!” from Nick.

With the lovely lunch consumed we soon were able to see the Needles and just about make out Hurst Narrows – a small gap between the mainland and the Isle of Wight through which we were to sail. All I can say is that it’s a good job that we’d practised our tacks as the next hour or so passed in a blur. At times it seemed that we were going to be sailing right onto a shingle beach and then at the last minute it’d be “ready about” and off we’d go in the other direction. Finally Nick announced “that should do us” and although to me it seemed like we’d hit the castle at the end of Hurst spit sure enough we slid sort of diagonally into the rough patch of water which is the narrows itself.

Without pause for breath it seemed we’d arrived off Yarmouth which was to be our destination for the night and we were then talked through the process of getting all of the sails down. I have to say that yet again I struggled to follow the entirety of the thing but at least managed to learn a new knot – “the slippery hitch” – to the satisfaction of the skipper. Then it was out with “fenders” and ropes to tie up with and in we went. Quite how Nick got us alongside I don’t know. Yarmouth turned out to be a lovely looking harbour but it sure was tight in there, packed with other boats and all sorts of stuff. But soon enough there we were tied up alongside the Town Quay. 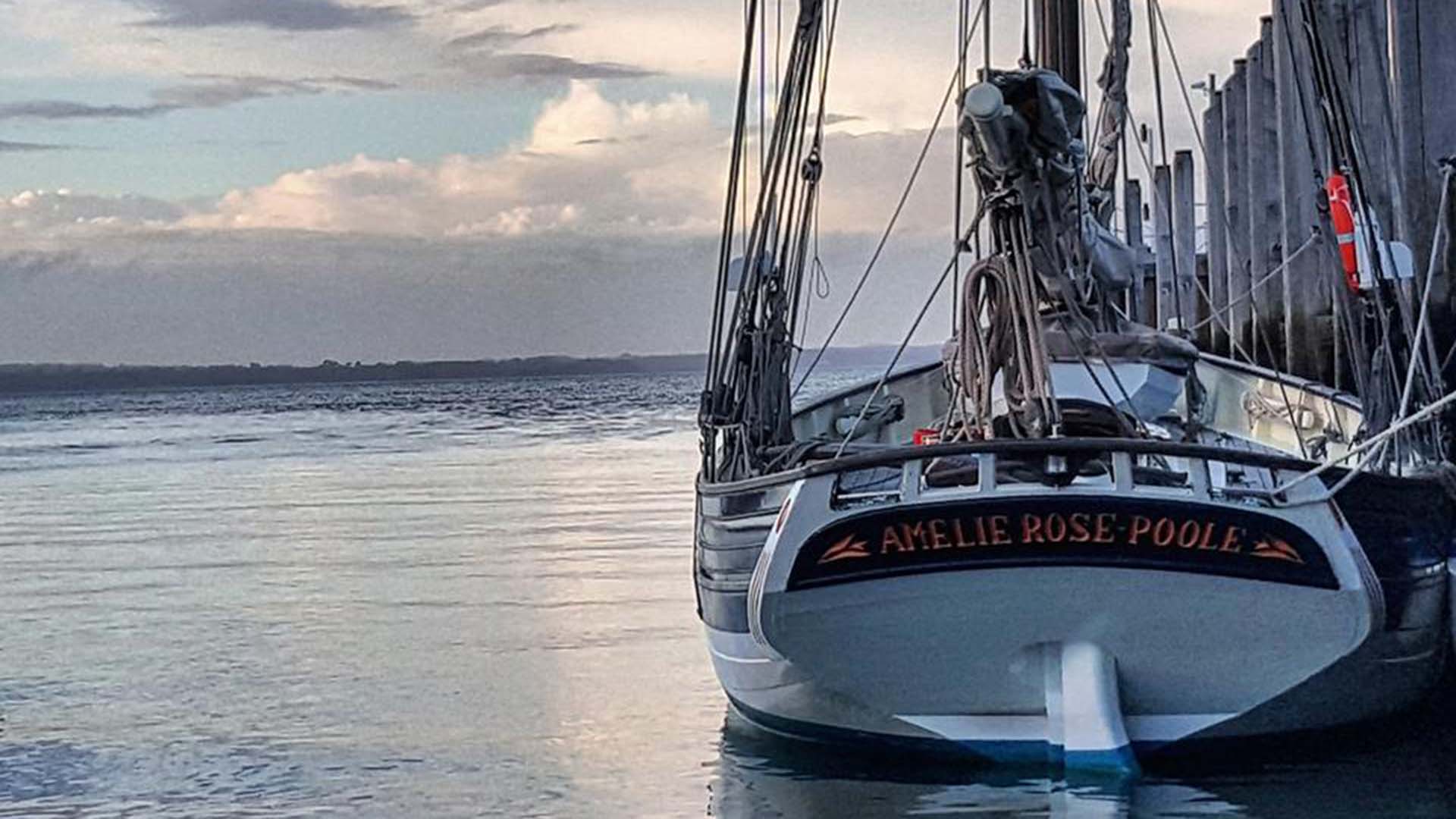 What a fabulous day! Later, as we sat down to a tasty dinner around Amelie’s saloon table, we were all buzzing with our own little stories about the voyage. It was lovely, not just the sail itself (though that was amazing), but to be a part of the whole thing and to be able to share it with other like-minded folks seemed to me to enhance the whole experience. After a group effort to polish off the washing up we all went ashore, some to the showers but most of us to a nearby pub where a couple of drinks seemed a fitting end to a great first day.

I barely remember going to bed that night, not because of huge inebriation but because I fell asleep so quickly! Apparently ferries come in and out of the harbour all night but I sure didn’t hear them, sleeping soundly until the aroma of strong French coffee woke me up the next morning. As all Sunday mornings should be, this was a most relaxed affair. Apparently the tide we needed wasn’t due until later and so we were treated to bacon sandwiches for breakfast and had plenty of time to stroll around ashore.

After this relaxed start to the day we were soon put back to work though, first stowing the fenders and ropes and then setting to with getting the sails up once more. This time bits of the process were at least familiar if not second nature and before long we were passing back through Hurst Narrows and off towards Poole. Again Amelie seemed to be rushing along and this time I even worked up the courage to have a go on the helm. Blimey! A dinghy she is not. I was amazed at the power you can feel through the tiller, and quite understand why Nick has a little block and tackle to help with the steering. The guys that sailed these boats, two-handed, in the Atlantic, must have been strong indeed and yet with Nick patiently talking me through the techniques I was able to acquit myself reasonably (and with a huge smile on my face the entire time). 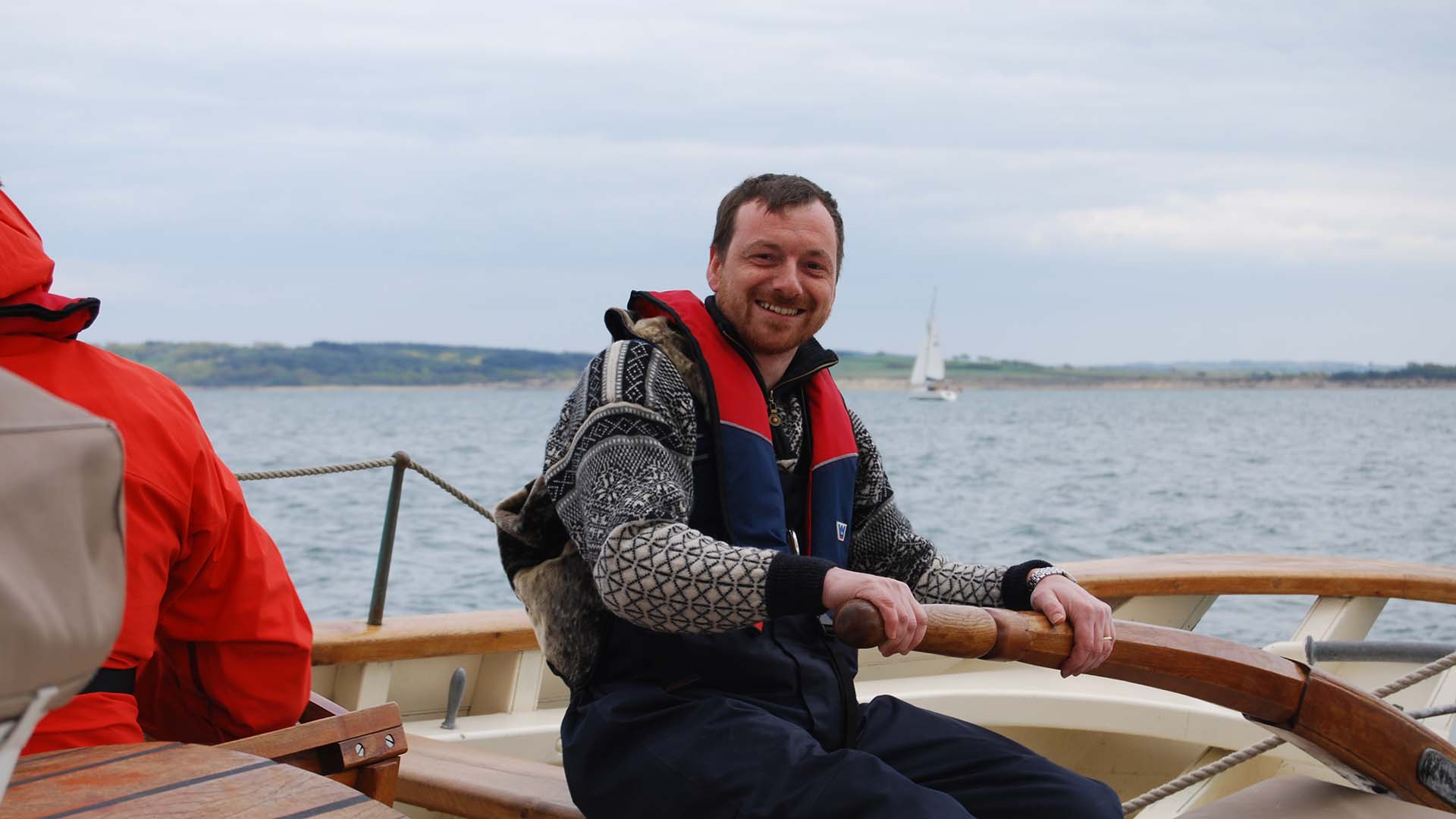 And then, suddenly it seemed, we were sailing in through Poole Harbour entrance once more – and all the way through the harbour to Amelie’s mooring. It’s a busy place with motor boats and pleasure steamers everywhere and I think that all of us guests were pretty glad when Nick took over the helm for this bit! We were soon made fast to the mooring and all got busy helping to tidy up, put on sail covers and get our bags packed. A quick water-taxi ride later and we were done. What a great weekend we agreed, having one last drink in the Lake Yard bar. Though we’d only known each other for 48 hours we all seemed reluctant to leave, but leave we had to.

I, for one, will be back. I have my eyes on an RYA Competent Crew course and can think of no other boat that I’d rather do it on.