Traditional Sailing – It is a Womens’ World Too 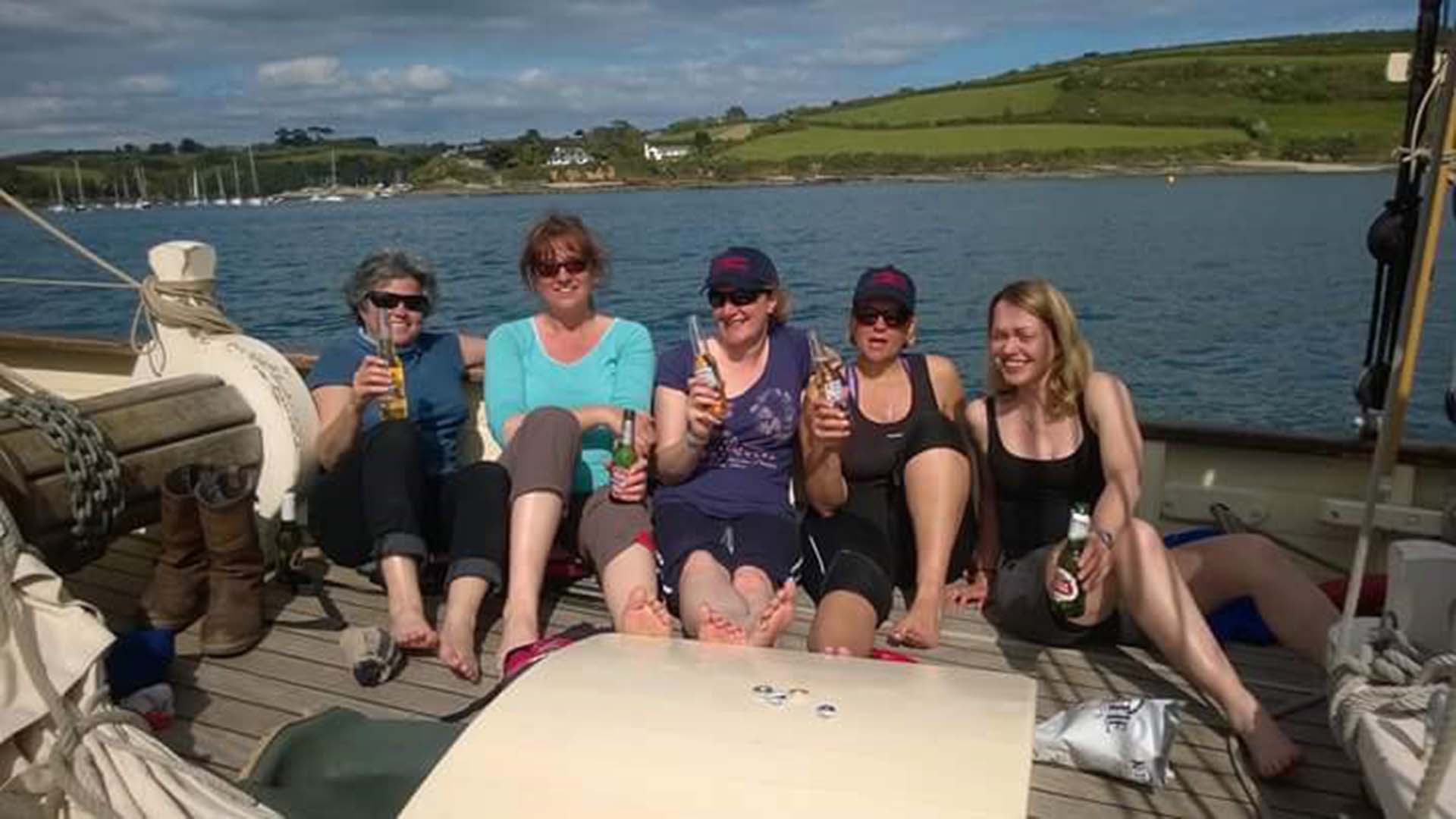 Part-time First Mate (and full-time woman) Rebecca Sykes takes aim at the stereotypes about Traditional Boat sailing and shares her thoughts on what it’s like as a female to join the crew of the Amelie Rose. 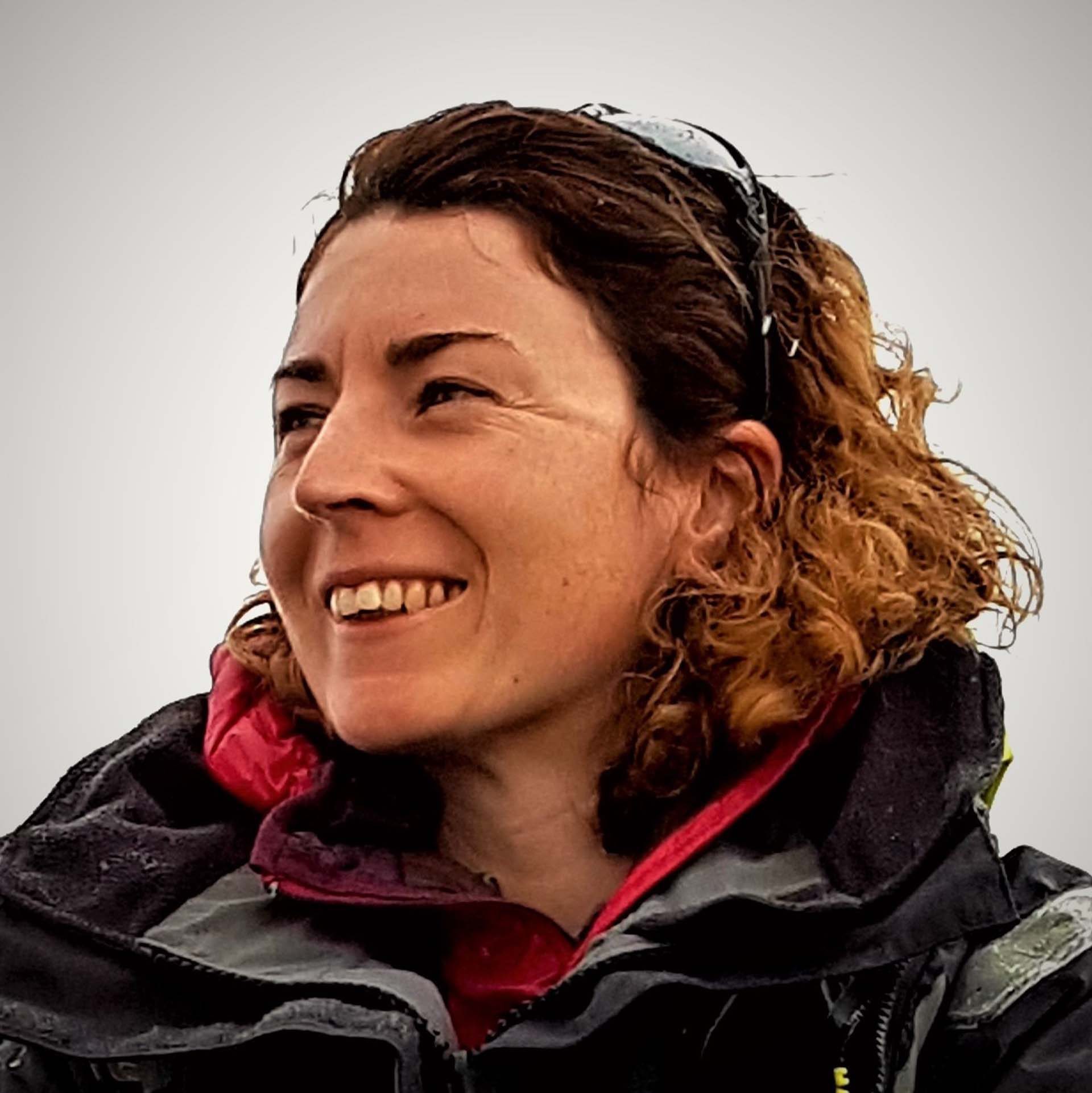 Picture Popeye and what sticks out? Well his pipe I suppose – but maybe what also springs to mind is him gorging on tinned spinach to boost his muscles. It seems that the perception of traditional boat sailing is one of burly sailors hauling on huge ropes to manage the sails. To be honest, one or two of those do turn up on occasion, but as with many things in life; style, technique and teamwork are just as, if not more, important.

That burly bloke perception is sadly perpetuated by cartoons, tv and films, so I wanted to share a bit about Amelie Rose and our philosophy to help calm any worries for women who are thinking of joining our happy crew. Women come in all shapes, sizes and preferences, and to be clear, so do men. So, whoever you are, I hope this allows you to feel more confident about sailing aboard the Amelie Rose.

So I don’t need to be Popeye, but what are the jobs to be done when sailing Amelie Rose?

Well there is hauling up the main sail which is done hand-over-hand until we need to make the sails really tight, or we get tired, and then we can use a technique called sweating and tailing. This is a two (or more) person job, with one person bracing the rope around a pin to allow their crewmates to use their body weight to take in some of the rope. The more people using their weight, the more weight you can lift. You’ve just got to get a rhythm going, it’s a bit like dancing really.

Then there’s steering the boat – with Amelie’s large rudder there can sometimes be considerable force on the tiller, but we have a tiller purchase (basically a block and tackle, or a pulley system) to make steering easier. An eye for detail and the ability to concentrate are often more important than brute strength, especially for downwind sailing.

Amelie Rose has potentially three headsails, the jib, staysail and sometimes a flying jib. When we change tack or need to trim the headsails, we might need to pull in on the sheets to change the shape and set of these sails. We have a pulley system on both the jib and staysail sheets to do this. Again, it’s often a two or three-person job, but there’s always space for more to join in. Being able to work together to pull the rope at the same time and communicate that the end has been tied off, before the pulling team let go, is much more important than pure strength.

I could go on – but while on one’s own, the gear used to hoist and trim the sails on Amelie Rose can take some effort, once we are a crew we have many techniques and ways to work together to get the job done.

Don’t want to pull a rope at all?

That’s ok – getting a crew safely and happily from A to B, (and generally back to A again) via any number of other alphabet locations, takes a host of skills. From navigation to cooking, from carrying out bits of impromptu maintenance to spotting navigational marks, organising which pub to visit or helping the skipper with the maths for the tides, keeping morale high with some funny stories or even making a cup of tea or baking a cake if you fancy…there are many jobs to be done and they are all equally valuable.

Boats are small places, the ultimate tiny homes. Amelie Rose has a heads (toilet) with a lockable door and plenty of hooks and places to put your clothes, so you can get changed in privacy. There’s also a cupboard if you want to stow sanitary items for your visit. We have a policy on Amelie Rose that if it has not been through you, it goes in the bin, so all toilet paper and anything else goes in a handy lidded waste bin by the loo. 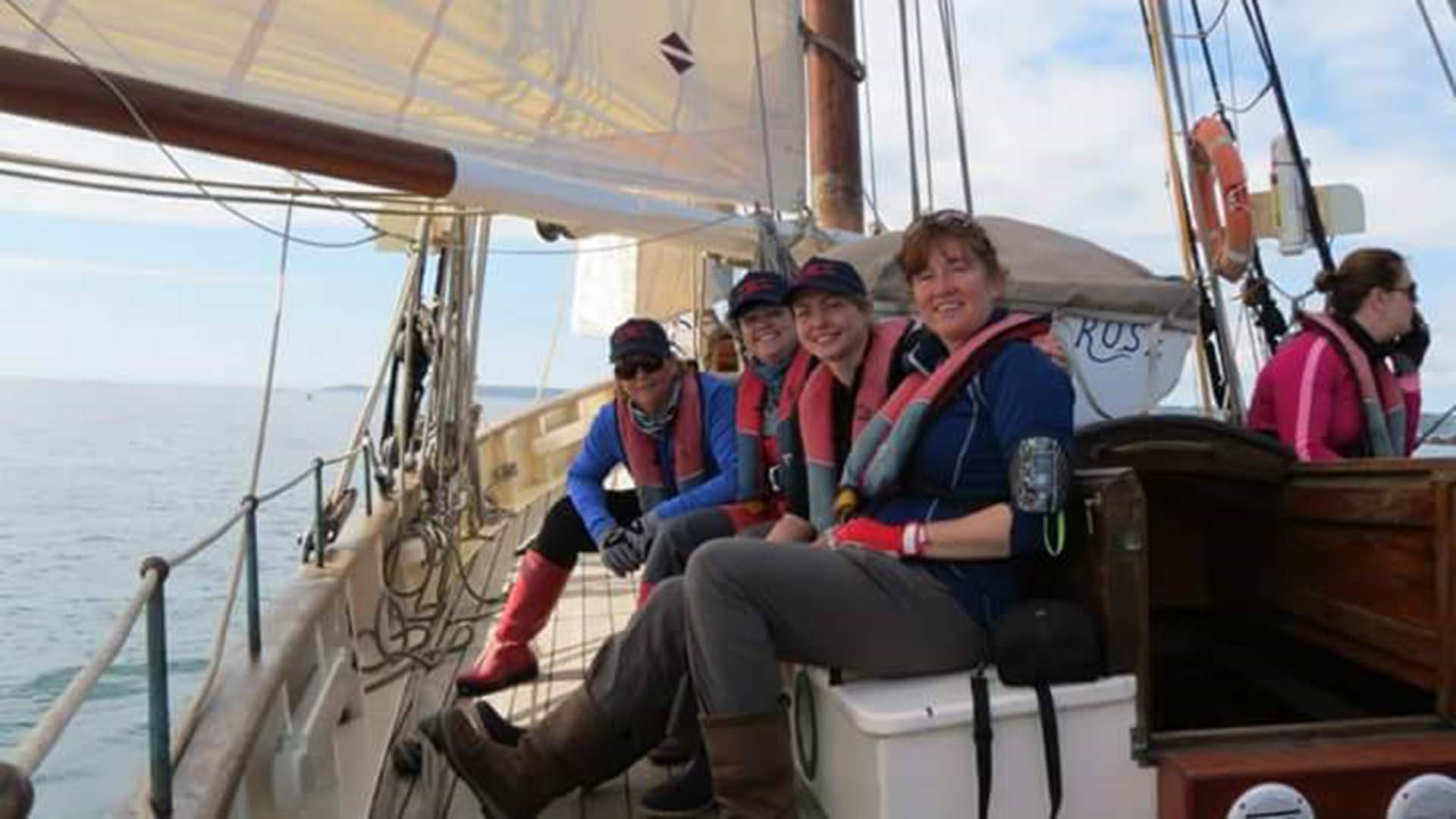 Firstly, that’s part of the charm of sailing, but that aside, there is an extendable shower hose on Amelie Rose. It’s generally not used because there’s many a night when we’ll be happily tied up alongside in a harbour or marina; it’s not just a woman’s thing to relish a warm shower! The ratio of men to women involved in sailing means we often get a wait-free experience – bonus. We also may not use the shower on board because water on board is a precious commodity, especially if visiting the beautiful but water-constrained Isles of Scilly, and I for one would prefer a good cup of tea to a shower. If you’d really like to have access to a land-based shower or toilet, do discuss this with the skipper and we’ll do our best to accommodate this.

A major bonus is that no-one really cares what your hair looks like, or whether you wore that t-shirt yesterday (I’d recommend merino wool for least smell!), but there is a mirror in the heads to check you’ve not grown gills and turned into a mermaid while aboard.

But what about the snoring and the farting?

Well there’s a bit of that I’ll grant you. Honestly though, are we any different? Ok, ok, ok…we snore less. I sail with ear plugs, boats creak, people creak, and sometimes the waves slosh along the side of the hull. We all need our beauty sleep and ear plugs mean I get to control the noise levels.

It’s all pasties and pies?

Not at all, we provide muesli and yogurt for brekkie, there’s plenty of fresh veg in the evening meals and always fruit available, as well as cake and crisps for those munchies moments. There’s often a stash of emergency chocolate as well, strictly for emergencies though!
We encourage all our guest crew to take it in turns to wash and dry up. It’s a sign of care for the boat crew, who typically cook, and your crewmates who’ll share in the care another night. Its something that’s often well managed by the group with no specific organisation but volunteers are especially smiled upon by Neptune.

You might, but Amelie Rose has a dedicated group of women sailors who return year-after-year and she often has a female first mate, including myself. The traditional boat world is full of amazing women doing amazing things…Skippers, first mates, shipwrights, cooks, deckhands, and… world champions. Yes, in 2015 Amelie Rose won the Pilot Cutter Championships, the only time she has done so (so far) and she did it with an all-female guest crew. We love celebrating this fact still. Woop woop!!! 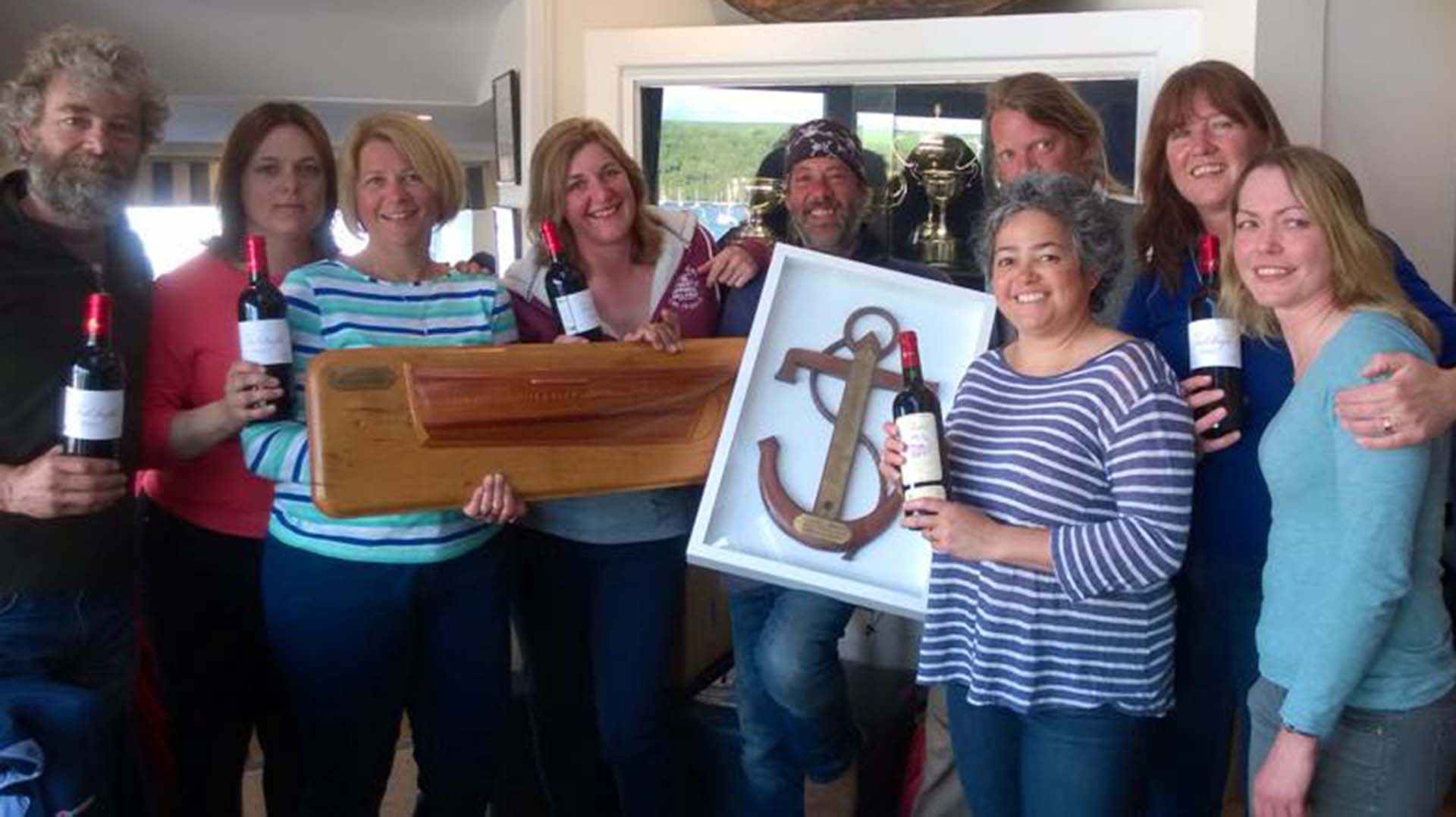 Hopefully I’ve dispelled any worries that you might have had, and now I’d like to say why it’s an amazing world to come and spend some time in. There’re the night sails under a sky full of celestial stars; there’re the bow riding dolphins who, at night, torpedo past leaving a wake of phosphorescense; there’re chats with likewise awesome people from all walks of life, there’s sketching seals basking on rocks in the isles of Scilly, there’s sitting on deck with a cold glass of white wine singing songs. Ok, we haven’t found any singing wine but we hope you might like to join us in a song.

I’ll hold my hands up now and say that there can still be a chauvinist attitude in the sailing world. There are memes of the male skipper barking unreasonable orders from the aft deck but it doesn’t have to be this way, and it is certainly not the way on Amelie Rose. We aim to enable you to love your experience of our world and hope you’ll join us soon.