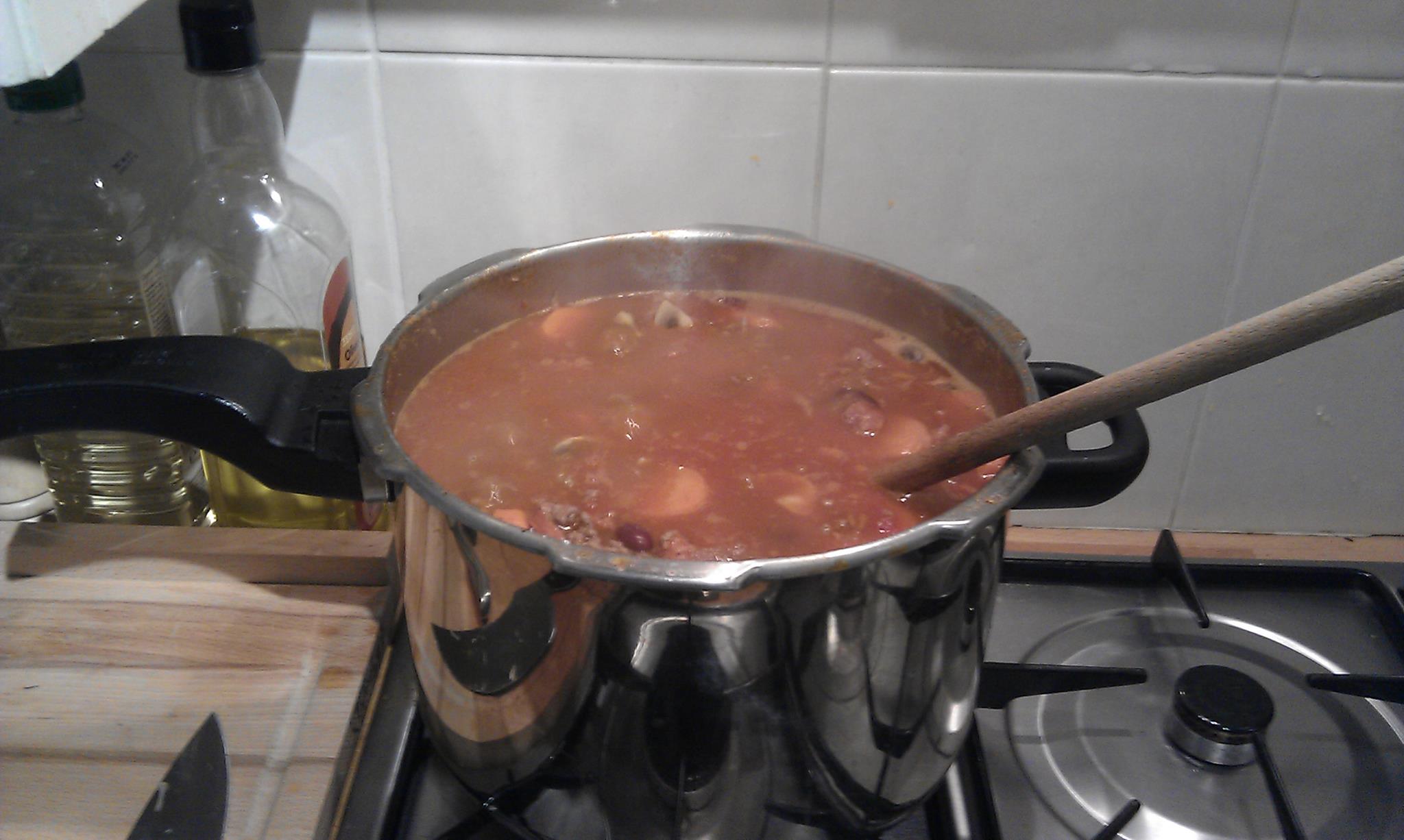 Ok, so everyone has a chilli recipe, right? In that case why bother to include this in my Galley Squawks at all you may wonder. The thing is, it’s such a staple when we’re aboard, and we get so many admiring comments (and so few leftovers) that I thought we really should.

A big pot of chilli is fabulous at any time but an ideal meal if you’re likely still to be on passage come dinner time because; a) it can be made in advance, b) it can be eaten from a bowl with a spoon, and c) if there are any remains they can be left on the cooker in case the night watch gets a little peckish come the early hours.

Although a decent chilli kinda has to include chilli peppers in some way shape or form I’ve found that these can be either calmed down or even missed out completely if anyone really can’t manage them. The key here is to make sure that there is a good depth of flavour, and that’s where the 3 meats and the long cooking time come into play.

I also have a damned fine vegetarian chilli recipe too btw (actually it’s vegan) – but I’ll cover that another time. The sharp eyed amongst you may note that strictly this is a 2 meat chilli, in that two of the ingredients are pork-based, but y’know – there are 3 meaty ingredients so it is what it is.

Time: 2 -3 hours depending on how fast you are at chopping things up.

Minced beef: 1 – 1.5 kg (I usually aim for a minimum of 150g per person but a little more or less won’t hurt). Lean or even extra lean is fine because there’s plenty of flavoursome fat coming from elsewhere – but on the other hand, you’ve been sailing so you’ll need that energy!

Chorizo: 100 – 200g, However you can get it really, either a “ring” (like a U shaped sausage) or slices like pepperoni. If you end up with a ring don’t forget to peel the skin off. I generally get the slices as they are easier to cut up. This is being added primarily for its smoky flavour but by all means get a spicy one if you want.

Green Streaky Bacon: 12 – 20 Rashers (basically a packet). I don’t mean mouldy, I mean not smoked. Quite why this is termed “green” has never been explained to me but there we are. To be honest, the fattier the better here – again this is flavouring – the fat will add richness to the end result.

2 – 3 Onions: Use 3 if they look like overgrown pickled jobs, 2 if they are at least as big as your fist.

4 Carrots: Again, add more if they are spindly little affairs. Some would argue that carrots have no place in a chilli. I say that they are cheap, good for you and work perfectly well with the flavours here, so “some” can go have that argument elsewhere. Ditto any other bits and bobs of root veg or leftovers that you have lying around. Just chuck it in at what seems like an appropriate time.

Mushrooms: Approx 600g, that’s usually two packs if your mushrooms come in those horrible plastic boxes that make them sweat. Any type will do.

1 large tin of Sweetcorn: As much as you like really – adds sweetness and crunch.

2 400g tins Peeled Plum Tomatoes: You can use ready chopped but whole are generally cheaper and in my opinion you get more actual tomato in the tin.

0 – 5 tsp Cayenne Pepper: Essentially this is a question of how much you like heat. If you decide on less cayenne then add more paprika. The total should be 5 tsp of red stuff, how you split it is up to you. Chilli flakes can also be substituted for some or all of the Cayenne. (The flavour from flakes is different and, to my mind, nicer)

2 tsp Basil & 1 tsp Oregano (or a generous sprinkling of mixed herbs, or tea, or whatever comes to hand really)

2 tbsp Vinegar: Yeah, malt vinegar, like you put on your chips. I know, it’s weird – just trust me ok? (The acid in the vinegar will take the heat out of the chilli – which is an alkali – but will leave the flavour behind.)

4 tsp Sugar: Unfortunately, the vinegar, whilst awesome at de-heating chilli, does tend to sour things rather. The sugar redresses the balance.

Now, you may, or may not have cooked any of my stuff before but you should know that I really, really am not a fan of faffing about like the TV Chefs do. So – if you want to brown your meat and set it aside whilst you soften the onions with a gentle caress of heat and all that associated rubbish, you go right ahead. This is how I do it, and it tastes just fine.

If you want to speed it up a bit then you can jack the heat up for the second (lid off) stage but make sure that you stir it regularly if you do. Equally, if you want to slow it down then just turn it off at the second stage (but put the lid on it). You can then complete the job with the lid off when you’re closer to hungry time.

PS If you have a freezer then this freezes beautifully and is the perfect “instant” microwave meal.

Enjoy! (And let me know how it goes in the comments below).