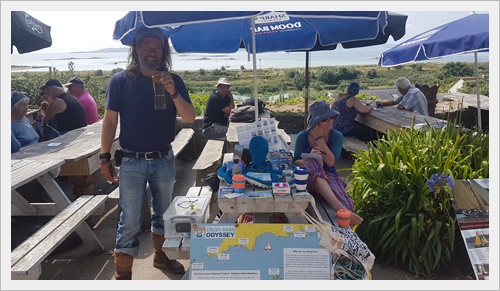 As mentioned elsewhere, the Isles of Scilly hold an enduring fascination for us and one of the highpoints of 2018 was surely that we got to spend a whole fortnight buzzing about them on our Clean Seas Odyssey. Over the years we’ve experienced Scilly in all kinds of weather, with the wind coming from most points of the compass and this, plus help from our friends and our trusty Pilot Book, have given us quite a repertoire of anchorages and havens to hole up in. In no particular order here’s ten of our favourites. 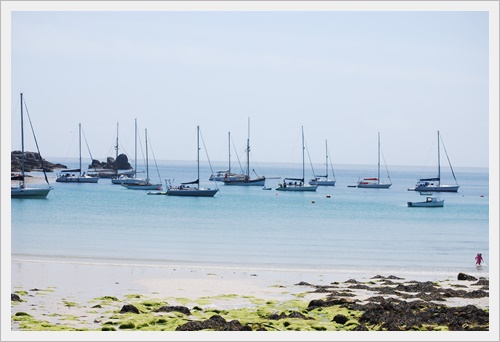 1 The Cove (St Agnes/Gugh)
Nestled between St Agnes and Gugh the Cove is often our first touch-down upon arriving. The white sandy beaches of the bar that joins these two islands at anything below high water are a great place to set foot on the islands for the first time. St Agnes is also the home of the Turks Head – the UK’s most South-Westerly pub and (usefully) one of the few places on the Island that you can get a decent phone signal. 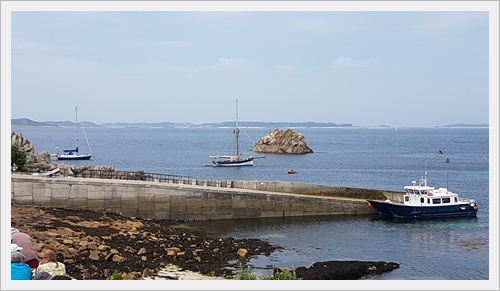 2 Porth Conger (St Agnes/Gugh)
Situated to the north of the bar between St Agnes and Gugh this is the anchorage to head for if the wind is too far into the South to sit comfortably in the Cove. It also gives you the chance to compare the sight of Amelie Rose riding at anchor next to Cow Rock with a picture of two original Scilly Pilots moored in the exact same place that hangs in another nearby bar, that of the Turks Head. 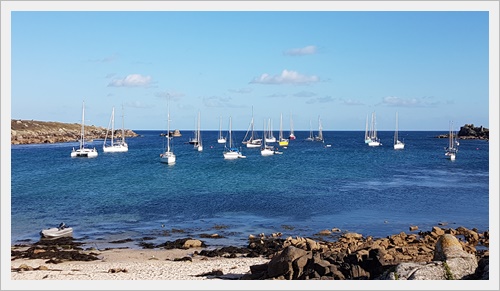 3 Porth Cressa (St Marys)
A gently shelving sandy bay South of Hugh Town on St Marys. This is as “big city” as Scilly gets – which means that they have roads and cars and shops including (shock horror) a supermarket. The anchorage is good for anything from NE through N to W and so we generally will end up there at some point (usually when the food starts to run out). The useful (or irritating, depending on your point of view) moorings that had been laid by a local couple of divers have gone now – along with the useful (always) water tap that they let us use at their house nearby. 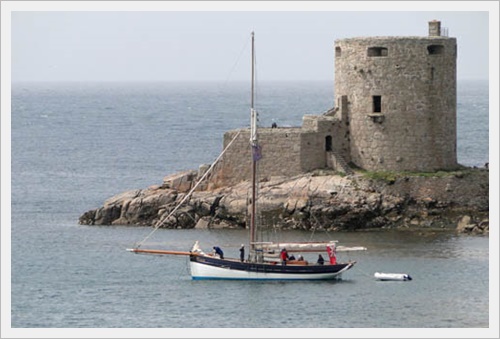 4 New Grimsby Sound (Tresco/Bryher)
A beautiful, if busy, sound between Bryher and Tresco, lying NW to SE but protected from the South by shallows and reefs below about half water. There’re moorings here, including a couple big enough to take Amelie Rose and her ilk but there’s plenty of space to anchor too unless Easterlies have set in – when everyone will be clustered in one of the very few protected spots of which this is one. Bryher is wild and absolutely stunning and a visit to the Fraggle Rock Café is a must.

Tresco is like two islands bolted together after a bad accident repair. The north is barren and windswept and well worth wondering around, the South is green and bedecked with trees and tropical plants and is sculptured to within an inch of its life – a bit like the village from 60’s series “The Prisoner”. I think it’s weird but then I prefer wild places. It does have a nice pub WITH SHOWERS though, and the run up through the reefs from the South is a great way to arrive.

5 West Porth (Samson)
Nestled on the West side of Samson this is nice anchorage in Easterlies but very open to the West. The island – which was inhabited until 1855 is now deserted apart from ruined stone cottages which make for a very interesting insight into what life must have been like for islanders back then. There are also some lovely beaches around the coast but absolutely no facilities whatsoever. But then that’s why we have a boat – bliss! 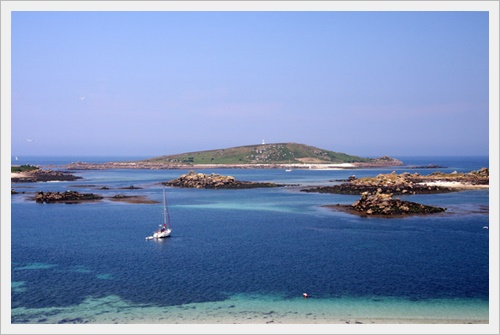 6 St Helens Pool (St Helens)
The closest thing that the Isles of Scilly has to an “All Weather” anchorage – though even here you might have to move around a bit to get the best shelter. At high water you appear to be almost at sea in the space between St Helens to the North, Tean and St Martin’s to the East and Tresco to the West, but as the tide ebbs reefs and rocks appear all around and you feel trapped on all sides by granite teeth instead. It’s another stunning anchorage, again with no facilities at all apart from on Tresco and St Martin’s but St Helen’s is an interesting island to explore (deserted now) and sometimes it’s nice to get away from the crowds. 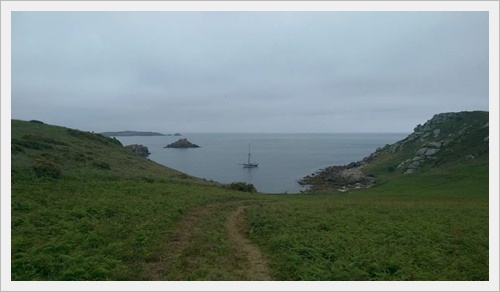 7 Great Bay/Little Bay/Bread and Cheese Cove (St Martins)
North East of St Martins lie these three bays – of which Bread and Cheese Cove is probably the most spectacular but Great Bay is the easiest to land the dinghy on. Great Bay has a lovely beach and its position; with virtually all of the Islands lying twixt it and the Atlantic when gales blow in from the South West makes it the hidey hole of choice if the conditions get hairy from that way. It’s a bit of a trudge from here to civilisation (mainly in the middle of the island and on the Western side) but in the right weather it’s a bloody lovely trudge. 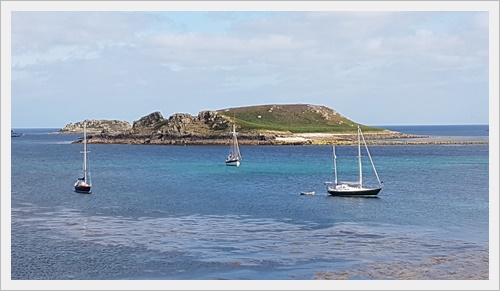 8 Great English Island Neck (St Martins)
Situated at the Eastern end of the South Coast of St Martins this is a good anchorage if Tean Sound is a bit too open from the North West (which renders the Bays above unusable too). It’s a bit of a haul in the dinghy from the beach to water deep enough for Amelie Rose but hey – that’s why we have a big outboard. A fairly easy scramble gets you to High Town ashore and the lovely bakery there – the pub is still a fair way off though. Also close is Great Ganilly and Nornour, more of which coming up. 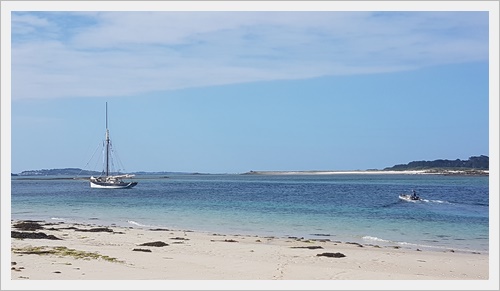 9 Tean Sound (St Martins)
Getting the feeling that we like St Martin’s? Good! It’s bloody lovely and definitely our favourite island in Scilly. Not least amongst the reasons for this is the pub in Lower Town, a mere stumble up the hill from the anchorage at Tean Sound. It’s called The Seven Stones Inn and is run by friends of ours Dom and Emily. It has great cider, great food, great events and possibly the best view of any pub we’ve ever visited. Tean sound can be a bit of an “interesting” anchorage – the tide whistles through here and seems to change direction on a whim but we’ve never had any problems and did we mention how close it is to the world’s best pub? 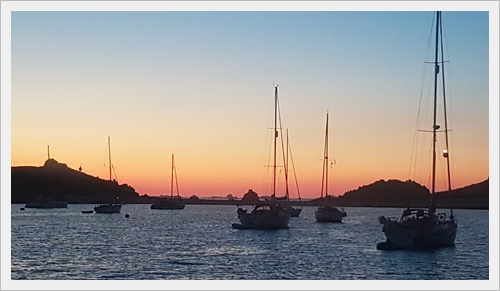 10 West Porth (Great Ganilly)
No visit to Scilly is complete without heading over to the Eastern Isles – which is mainly a bunch of rocks to the South of St Martin’s some of which have managed to furnish themselves with a bit of grass. Great Ganilly is the biggest and lovely enough to wander around on but it’s Nornour that we always try to get to. At low water you can just about make it across from Great Ganilly but we’ve landed the dinghy before and survived to tell the tale. Once there you can wonder around the collection of prehistoric round houses that still cling to the rocks there and marvel at the tenacity of human spirit that might figure that this was a good enough place to put down roots. West Porth itself is a lovely anchorage South of Great Ganilly. Much frequented by seals it makes the perfect jumping off point to head back to the mainland at the end of a Scilly adventure.